The Kingdom of Saudi Arabia lies between the Red Sea and the Arabian Gulf and has a land mass about the size of Western Europe. It contains the world's largest continuous sand desert, known as the Empty Quarter, and it is the biggest and most dominant country of the Arabian Peninsula.

Saudi Arabia is bordered by Jordan to the north; Iraq and Kuwait to the northeast; Qatar and the United Arab Emirates to the east; and Yemen and the Sultanate of Oman to the south.

Riyadh is the Kingdom's capital with an estimated population approaching eight million, the main Saudi Government offices are also situated here. Other key cities are Jeddah, the commercial capital, which is located on the Red Sea coast and Dammam on the Arabian Gulf. 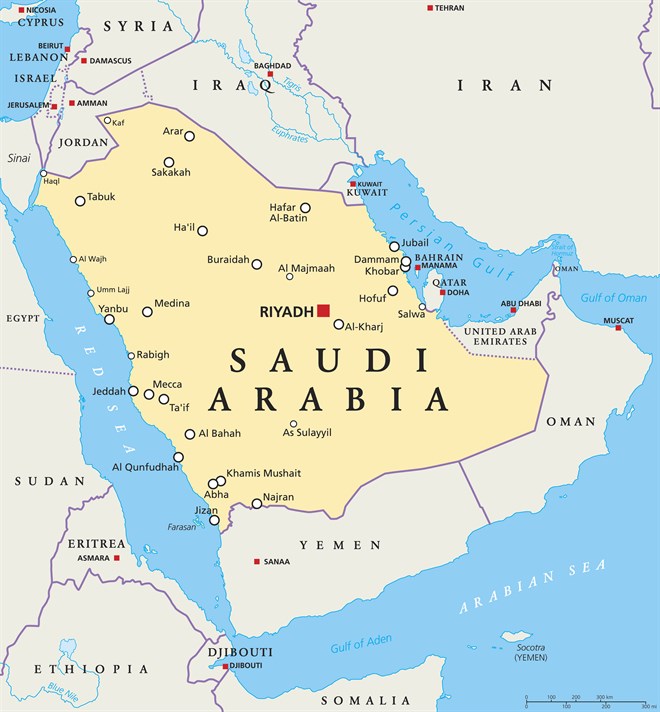 Saudi Arabia is named after the ruling Al Saud family. The Kingdom was established by King Abdul Aziz Bin Abdul Rahman Al Saud in 1932. Since his death in 1953, Saudi Arabia has been ruled by a succession of his sons. The King is formally responsible for making all major decisions, often based on consensus within a small circle of senior Princes, trusted advisors and the religious establishment.

Executive power rests with the Council of Ministers (Cabinet), whose members are appointed by the King. On 29th January 2015, King Salman issued a Royal Decree establishing two committees: one to oversee political and security matters, chaired by Crown Prince Mohammed bin Naif; the other on economic and development affairs, chaired by Deputy Crown Prince Mohammed bin Salman.

The 1st March 1992 Basic Rule of Governance established that the Holy Quran and Sunnah are the constitution of the country as well as the basis of Islamic Law (Sharia). A national Consultative Council, the Majlis al-Shura, was formed in 1993. The King appoints all 150 Shura members, who have an increasingly important advisory role and have powers to review and provide consultation on issues of public interest. In 2013, 30 women were appointed to the Shura. Local government is administered through general municipal councils, district councils and tribal and village councils. Two thirds of each council is elected and a third appointed. Political parties are banned by law. In municipal elections in December 2015, the first elections in which women could vote and stand as candidates, 21 women were elected and 17 appointed.

The country is divided into 13 provinces, each with a prince (who performs the role of governor) and deputy governor. Each province has its own council that advises the governor and deals with the development of the province. These councils deliberate on their constituency needs, work on development budgets, consider future development plans and monitor ongoing projects. The governor and deputy governor of each province serve as chairman and vice-chairman of their respective provincial councils.

Whilst the use of the death penalty and Sharia practices such as corporal punishment remain a concern for the UK, significant social and political changes are taking place within the Kingdom. Many visitors to Saudi Arabia find the negative stereotypes that prevail in the West to be not wholly accurate.

Saudi Arabia has signed the International Labour Organization’s Minimum Age Convention. It has also enacted regulations in line with the Worst Forms of Child Labour Convention since 2001. Tightened immigration rules mean foreign companies are unlikely to encounter the risk of hiring underage employees.

Saudi Arabia’s enormous oil reserves and historical development as a state mean Saudi nationals are underrepresented in the labour force (government data suggests 76% of workers in the Kingdom are foreign). This poses significant challenges for Saudi Arabia’s economic sustainability.

The most successful British companies operating in Saudi Arabia will be those that are able to transfer technology and upskilling of local people, manufacturing or assembly in the Kingdom, those that incorporate as much local content as possible (including direct employment of Saudis), and that are able to adapt to Saudi Arabia’s rapidly evolving (and generally improving) labour market and immigration regulations.

The Nitaqat system is tilted significantly towards women, and employers are rewarded for hiring Saudi females over Saudi males. Women still face more obstacles to participating in the labour force than men, owing to the wali (guardian system) which can limit their ability to travel.

However, attitudes are changing. More and more women are receiving higher education (the majority of students in Saudi universities are female), more young people are being educated abroad and an increasing number of work and public places are becoming non-segregated. 20% of the Majlis al-Shura are female, and women were elected and appointed in the municipal elections.

The most successful British companies will be those that can tap into this highly educated pool of Saudi females, whilst accepting that the forces of social conservatism mean Western styles of working will remain exceptions rather than the norm in the short to medium-term.

Homosexual acts are illegal in Saudi Arabia and can be subject to severe sanctions – as can adultery.

Saudi Arabia has a range of regulations and decrees specifying minimum standards of health and safety, and working conditions (covering everything from working hours to maximum temperatures), but British companies should aim to import health and safety best practice from their European operations to Saudi Arabia.

As with most forms of political association in Saudi Arabia, trade unions, industrial action and public protests by workers are illegal. Legal provisions for ‘workers’ committees’ in companies with over 100 employees have recently come into force. These are designed to be fora through which employers and employees can meet to discuss wages, conditions and health and safety. In practice, their effects remain to be felt on a large scale.

The Kingdom possesses around 25% of the world’s oil reserves, and plays a leading role in Organization of the Petroleum Exporting Countries (OPEC).

The petroleum sector accounts for roughly:

The Saudi economy remains dominated by hydrocarbons, primarily the extraction and export of crude oil. It has the second largest proven oil reserves in the world.

Saudi Arabia also has gas reserves of 290.8 Tcf (4.4% of the global total), but its annual production of around 4 Tcf is consumed domestically.

The Kingdom has ambitious plans to diversify its productive base and move towards private sector-led growth. Much government spending goes towards enhancing the human and physical capital of the Kingdom. Examples include new schools, universities, hospitals, transport networks and industrial sites.

The government is also working to improve regulation and the performance of its financial markets, and opened its stock market to large institutional foreign investors in June 2015.

Saudi Arabia is also working to increase the number of its own nationals in the labour force. In 2012, it introduced Nitaqat, a system which defines minima for the number of Saudi employees required in different industries and business operations. This has been followed with a drive to remove illegal foreign workers from the Kingdom: non-Saudis represent just 32% of the total population, but 89% of the private sector labour force.

Separately, the Saudi Government is looking to preserve its reserves of crude oil for export or higher value-added refining, by investing heavily in alternative forms of energy. Ambitious current targets would see 54GW of renewable generating capacity, and 18GW of nuclear generating capacity by 2040.

As Saudi Arabia attempts to diversify its economy, there will be opportunities in construction, transport infrastructure, project management, financial services, health and education.

Saudi Arabia is ranked 92nd out of 190 countries in the World Bank’s 2019 Ease of Doing Business Rankings: http://www.doingbusiness.org/en/rankings.

Benefits for UK businesses exporting to Saudi Arabia include:

Strengths of the Saudi market

Strengths of the Saudi market include:

Saudi Arabia has had a period of relatively high growth and economic progress over the past few years. It is predicted to grow by at least 3% for the next couple of years.

With 50% of Saudis under 25 years old, the Saudi population is one of the fastest growing in the world. The current population of over 32 million is expected to increase to over 35 million by 2020. The large youth population generally lacks the education and technical skills the private sector needs.

Massive investment will be required to meet the needs of this growing population. The Kingdom has substantially increased spending on employer-led vocational training and education. This includes opening a number of new women’s colleges and the women-only Princess Noura University.

The government is also encouraging foreign companies to invest in vocational and technical training in support of Saudisation.

The Saudi Government is pursuing a strategy of economic diversification and reform to:

The government is also focused on getting private and foreign investment in important sectors such as:

Saudi Arabia is the largest free economic market in the Middle East and North Africa (MENA) region. It is part of the Gulf Cooperation Council (GCC) and has free trade agreements with:

The UK has a strong historic relationship with Saudi Arabia. The Kingdom is the UK’s largest trading partner in the Middle East.

The UK exported around £6.2 billion goods and services in 2017 – goods exports were 4.57 billion. Over 6,000 UK firms actively export goods to Saudi Arabia.

The top UK exports to Saudi Arabia are:

The UK is the Kingdom’s second largest cumulative investor with approximately 200 joint ventures, estimated to be worth over £10 billion.

There is considerable Saudi investment in the UK.

Contact a DIT export adviser at: https://www.great.gov.uk/contact/triage/location/ for a free consultation if you are interested in exporting to Saudi Arabia.